The decentralized finance (DeFi) space has been a reservoir of exciting trading opportunities since June 22. Based on the charts, SOL and COMP stand out for their relative strength and future potential to decouple from the flagship cryptocurrency, Bitcoin.

On June 30, Solana price released from a symmetrical triangle forming for several weeks that soon lifted SOL above the tactically important 50-day simple moving average (SMA). It was a rare example of relative strength in the cryptocurrency complex lacking leadership from Bitcoin.

The emergence of Solana price from the continuation pattern follows a long, noteworthy uptrend that began at the end of December 2020. SOL volume during the pattern formation was largely below average, characteristic of constructive symmetrical triangles. Moreover, SOL first highlighted leadership potential on June 22 when it did not print a new correction low, flashing a bullish momentum divergence versus the broader cryptocurrency market.

The measured move of the symmetrical triangle pattern is 67%, locking the Solana price target at $58.95. The target falls slightly above the all-time high of $58.38 printed on May 18, thus suggesting that SOL will print new highs if the rally regains momentum. However, there is one caveat. If a throwback develops, there is a high probability that the cryptocurrency will fall short of the target.

Suppose there is a stabilization in the cryptocurrency market. In that case, it is anticipated that Solana price will engineer the rally relatively quickly as the entire DeFi space appears to have recovered the bullish trend that dominated the first months of 2021.

A Solana price close below $31.36 would be a bearish development, signaling that the throwback, common with symmetrical triangles, is evolving into a deeper problem. SOL does not have any further clear support until the 200-day SMA at $21.83.

Compound price executed a 170% rally off the July 22 low of $196.46 in just a few weeks, reclaiming the strategically important 200-day SMA at $402.84 on July 4 and testing the early June highs around $465.00. Like SOL, COMP was charged by the renewed interest in the DeFi space as noted by the largest daily volume for an up day on July 5 and the first oversold reading on the daily Relative Strength Index (RSI) since early May.

In the short term, Compound price is destined to consolidate the gains and release the price compression generated by the sharp rally. However, COMP should identify support in the vicinity of the 200-day SMA at $404.41, and the consolidation process should take a few days or maybe more.

As of today, Compound price is holding the 200-day SMA, and the volume underlying the three-day pullback has been decreasing, insisting that investors are not eager to lock in profits. Continuing the reset would enable the 50-day SMA to revert higher, adding more support for any potential weakness that may arise moving forward.

If Compound price pursues the scenario outlined above, it will shape a generous inverse head-and-shoulders pattern with a measured move of 157%. A rally of that magnitude would demolish the all-time high of $911.00 printed on May 12 and likely set the standard for DeFi tokens and the cryptocurrency complex.

A daily close above $464.00 will be the first opportunity to initiate a long COMP position, followed by a trade above the neckline, currently at $538.00. 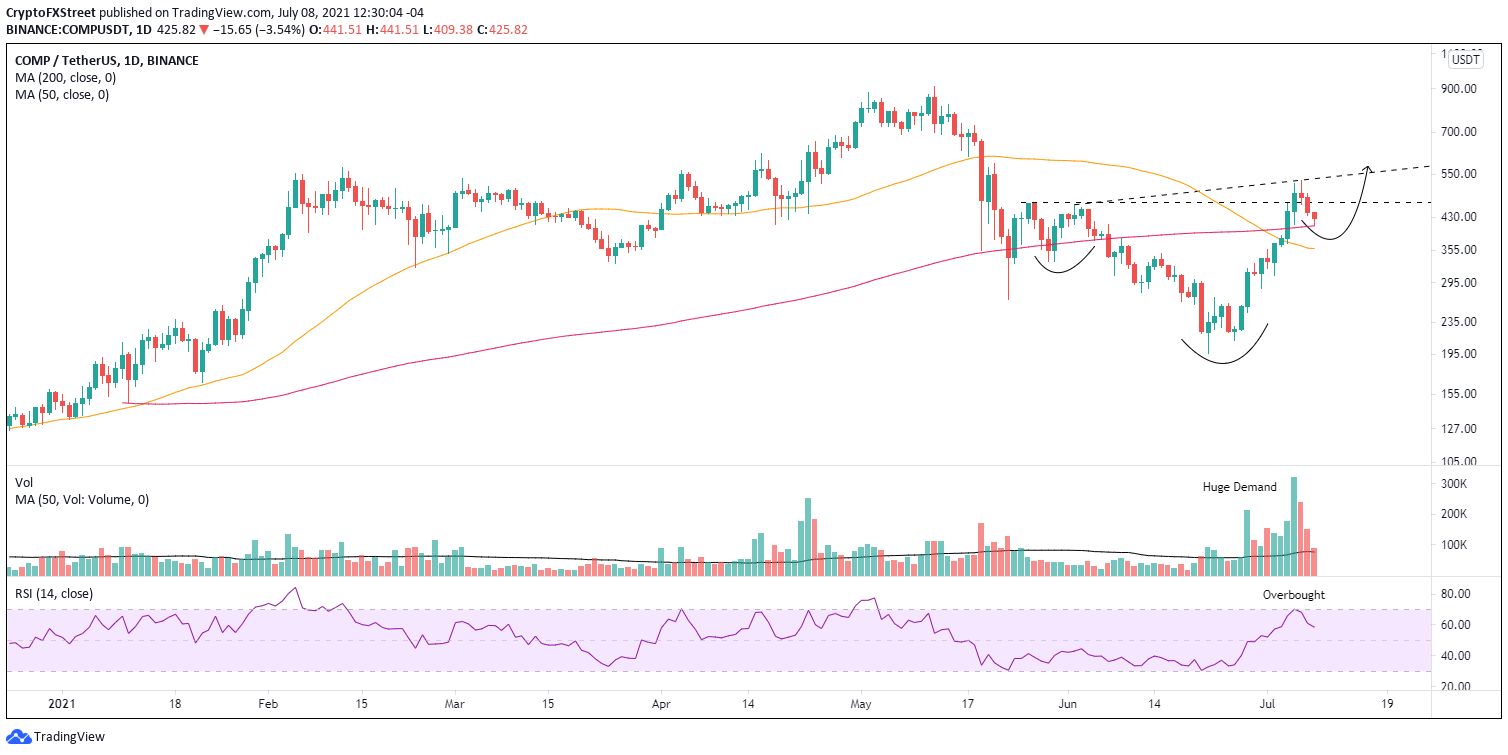 Based on symmetry and depth of the left shoulder, if Compound price logs a daily close below $372.00, it will negate the pattern and forecast a more complex consolidation for COMP.

The restored bid in the DeFi space elevated SOL and COMP on the leaderboard and created constructive price structures that have manufactured precise entry and support levels. As a result, Solana price and Compound price are well-positioned to build on the momentum and further decouple from Bitcoin, as the pioneer cryptocurrency trades below key moving averages, yet to establish any credible uptrend.

Relative strength is the basis of continued outperformance, and overbought conditions tend to remain overbought much longer than investors predict. On that basis, SOL and COMP are in a timely position for future gains.

Litecoin Climbs 10.03% In Rally By Investing.com