XRP price volatility tested the legal uncertainty price range in May, but it rebounded quickly and convincingly. Ripple has clarified price structure with a cup-with-high-handle base on the four-hour chart, providing the first precise, actionable price level for bullish investors. The notable levels of resistance should melt away if the cryptocurrency complex builds on recent gains.

XRP price illustrates a cup-with-high-handle base on the intra-day charts. It is a high handle base because the high of the handle has closed above the high of the left side of the cup. The pattern development has been consistent with successful precedents, defined by rising volume on the right side of the cup and then declining volume as the handle progresses. As for timing, the base could trigger in the next couple of days.

The outlook is altered if XRP price closes below the 50 four-hour SMA at $0.964. It may signal another test of the $0.800-$0.850 price range that has been constructive support against heavy selling since the May 19 low.

The dogfight between Ripple, the issuer of XRP, and the Securities and Exchange Commission (SEC) has yielded another victory for the blockchain-based digital payment company.

The SEC argues that Ripple executives illegally marketed the native XRP digital asset as an unregistered securities offering. The failure to register the sales according to the SEC violated federal securities laws.

However, Ripple argues that XRP is not a security but a currency or virtual currency with many uses that preclude it from being classified as a security.

In the latest ruling, the judge pushed back at the SEC after it requested to see evidence of Ripple’s legal consultations over the status of XRP going back to 2013, saying the “requested communications are protected by the attorney-client privilege, which has not been waived.”

Some believe it is a critical inflection point in the case because it has undermined the SEC’s ability to access documents that Ripple lawyers maintain are confidential, which is now supported by the law.

It is not the end of the legal tussle. Still, from a macro perspective, any Ripple setbacks will be matched by new legal maneuvering from the company because it has the resources to take the case to the Supreme Court if necessary.

On May 24, CNBC announced that Ripple, the issuer of XRP, was named to its ninth annual “Disruptor 50” list. The list highlights private companies with growth-orientated business models that are delivering a rapid pace of technological change. 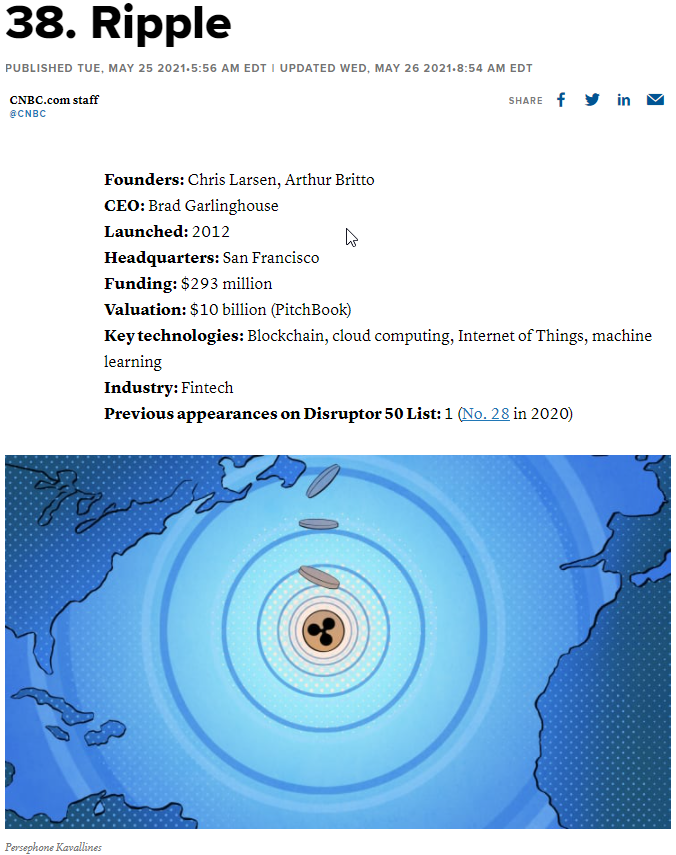 At the forefront of the technological change, outlined in Ripple’s vision of the Internet of Value, is enabling a single payment from one geographical location to another as quickly and seamlessly as information.

At Ripple, we believe the most significant benefit of the internet of value will be for payments. We provide one, frictionless experience to send money globally using the power of blockchain.

Until now, the selling, buying or exchanging of assets has always required an intermediary like a bank, marketplace or credit company, but blockchain technology, such as Ripple’s solution, allows assets to be transferred from one party directly to another with no intermediary. The transfers are instantaneous.

The vision coupled with the advanced technology has positioned XRP as the only centralized cryptocurrency in the world directly intertwined with the global banking community.

XRP has a special status as it is accepted by hundreds of significant banks and other financial institutions such as MUFG, BBVA, SEB and Axis Bank. Just this week, BankDhofar launched a mobile banking payments service from Oman to India with RippleNet. It is another milestone for Ripple’s vision of the Internet of Value.

The rapidly growing expansion into the global financial community is not near the end but at the end of the beginning. There is a tremendous upside that will deliver exponential growth, making XRP a compelling investment opportunity for years to come.

XRP price forms long term base worthy of a 620% rally

Patience breeds opportunity in investment, and XRP price has assembled a multi-year head-and-shoulders pattern, extending from 2018 to 2021. The pattern triggered the beginning of April, catapulting Ripple 113% in one week.

The right shoulder of the pattern was formed in the legal uncertainty price range associated with the SEC instigated crash in December and the volatile rebound into April.

The measured move target of the pattern is $5.728, generating a 620% from the neckline that was successfully tested during the deep May correction. The rally would easily overcome the January 2018 high at $3.300. 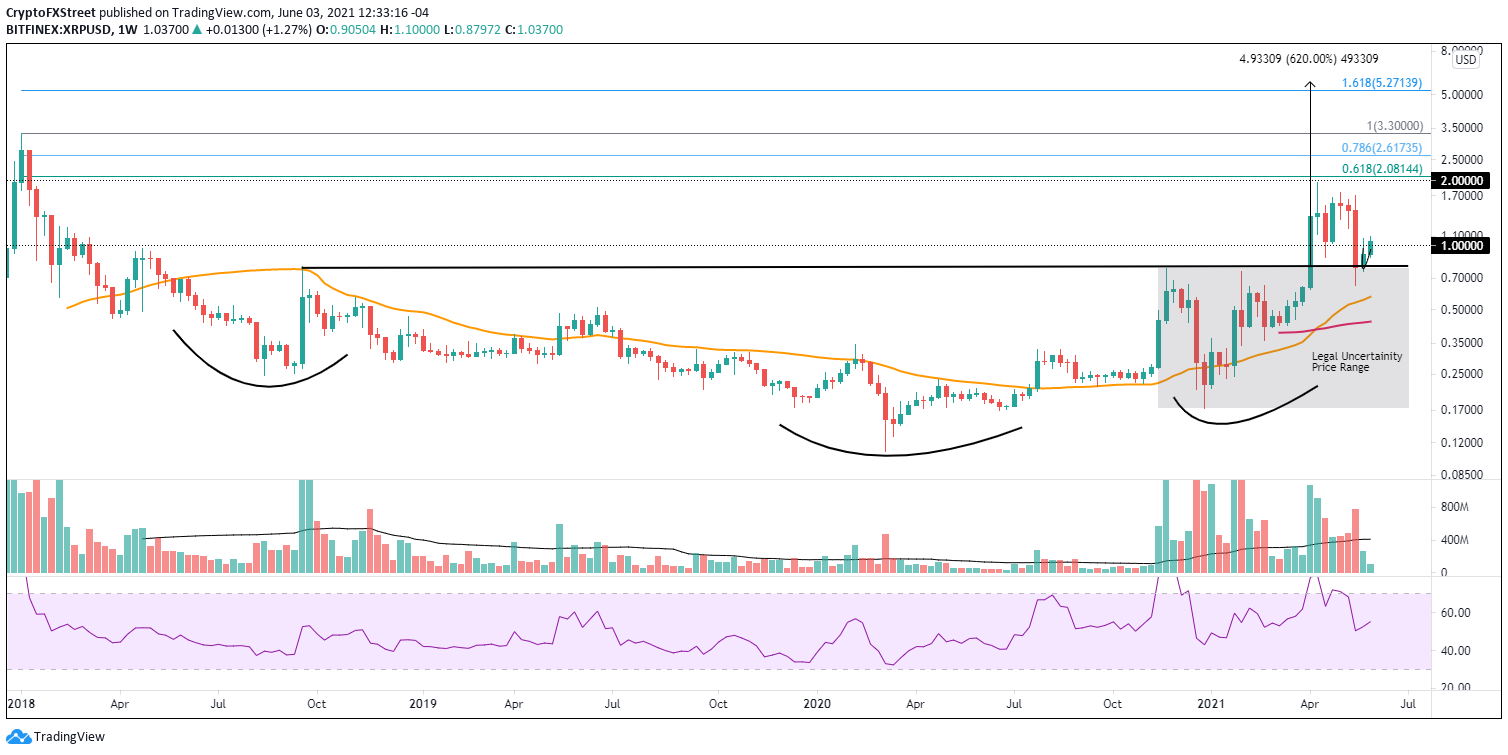 With the SEC case gaining traction in favor of Ripple, the rapid adoption of the Ripple payment system and a solid price structure to secure a significant rally, XRP price presents a high probability opportunity to not only overcome $3.30 but to print notable new highs. The developing minor cup-with-high-handle base is a fresh opportunity for investors to participate in that growth story.